Sharing the seabed in harmony with others

Welcome * Benvenuto * ようこそ * Accueil * Bienvenida
The International Cable Protection Committee (ICPC) is dedicated to the sharing of information for the common interest of all seabed users. ICPC represents all who operate, maintain and work in every aspect of both the telecommunication and power cable industry. All areas of this site are available for public viewing except for the Members area which is reserved for administration of the ICPC.

About the ICPC
ICPC has been representing the undersea cable industry since it was founded in 1958 with the vision to be the premier international submarine cable authority, providing leadership and guidance on issues related to submarine cable security and reliability. The ICPC provides a forum in which relevant technical, legal and environmental information is exchanged among its international members.

ICPC News
Read about ICPC's involvement within the submarine cable community as well as learn about its activities and global outreach within the industry.


The ICPC has more than 190 MEMBERS from 69 COUNTRIES and has the vision to be the recognised Guardian of Subsea Cable Infrastructure, providing leadership, guidance and a voice for the industry. The ICPC ACHIEVEMENTS and activities advance the ICPC towards this vision.


The ICPC is pleased to announce that after three years, we are returning back to an in-person Plenary for 2023. This much awaited-for-event will be held at the NOVOTEL Madrid Center in Madrid, Spain from 18th - 20th April 2023.

Under the theme, ‘Submarine Cable Resilience—Back to Basics,’ the ICPC now seeks presentation abstracts that address the foundational aspects of cable protection, forming the basis of resilient cable infrastructure. The Abstract deadline date is Friday, 13 January 2023 and you may submit your abstract here.


Hosted by the Indonesian Naval Hydro-Oceanography Center (Pushidrosal), the International Hydrographic Organization (IHO) held its Hydrographic Services and Standards Committee Meeting (HSSC-14) from 16-19 May 2022 in Bali where the chairman of the International Cable Protection Committee (ICPC), (Mr Graham Evans), was presented with a token of appreciation by the Indonesian Chief Hydrographer Vice Admiral Nurhidayat. The personalised plaque was granted to ICPC due to its support and advice related to submarine cable route planning, installation, and maintenance best practices. On behalf of the global organisation that is dedicated to the sharing of information for the common interest of all seabed users, the plaque was graciously accepted by the ICPC.

ICPC advice and support had been provided at the request of Pushidrosal by way of an informative workshop that was led by Mr Evans from EGS Survey Group, and supported by Ms Geraldine Le Meur from SubCom, that was virtually-held on 4 March 2022. The workshop focused on enquiries raised by Pushidrosal and Indonesian Government stakeholders that were related to submarine cable industry best practices for both telecommunications and power cables within the context of both Indonesia’s development of submarine cable infrastructure to support the developing digital economy across the vast Indonesian Archipelago. How best practices aligned with the importance of Indonesian Marine Spatial Planning objectives were also discussed.

Earlier this year, the ICPC published ‘Government Best Practices for Protecting and Promoting Resilience of Submarine Telecommunications Cables' to assist governments in developing laws, policies, and practices to foster the development and protection of submarine telecommunications cables, the infrastructure of the internet. The full document may be found here. 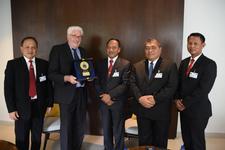 Rhodes Academy. Each year, the Rhodes Academy brings together approximately 50 mid-career professionals from around the world to study and learn from leading ocean law and science scholars, judges, and practitioners about the law of the sea and its key legal instrument, the United Nations Convention on the Law of the Sea (UNCLOS). The Academy is organised by a consortium of research universities and institutes, led by the School of Marine Science and Ocean Engineering at the University of New Hampshire. After the COVID-19 pandemic led to cancellation of the Academy in 2020 and a virtual Academy in 2021, the Directors of the Academy are pleased to return to Rhodes in person for this year’s Academy. For more information about the Rhodes Academy and the writing competition, see https://marine.unh.edu/academics/rhodes-academy and https://cil.nus.edu.sg/publication/rhodes-academy-icpc-submarine-cables-writing-award/.

The Award. Each year, the winner will receive either guaranteed admission and a full scholarship (covering the attendance fee, travel expenses, and shared hotel room) to the Rhodes Academy, or for a Rhodes Academy graduate from a prior year, a cash award of GB £4,500. The winner will receive assistance from the Rhodes Academy in seeking publication of the winning paper and will also be invited to speak at the next ICPC Plenary meeting to be held in Madrid, Spain from 18th – 20th April 2023. The papers of all past winners have been published in peer-reviewed journals.

About the ICPC. The ICPC is the world’s premier submarine cable protection organisation. It was formed in 1958 to promote the protection of international submarine cables against human and natural hazards. It provides a forum for the exchange of technical, legal, and environmental information about submarine cables and engages with stakeholders and governments globally to promote submarine cable protection. The ICPC has over 185 Members from over 60 nations, including cable operators, owners, manufacturers, industry service providers, as well as governments. For further information about the ICPC, see https://www.iscpc.org/ and https://www.linkedin.com/company/icpc-ltd/.

View Cableships of the World

Cables and the Marine Environment - From Ocean to Cloud